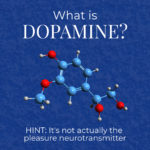 What is Dopamine? HINT: It's not actually the pleasure neurotransmitter

Dopamine is a neurotransmitter, a chemical messenger, that helps relay messages between nerve cells in our brain. Dopamine is released whenever we need to pay attention usually because an outcome is uncertain.

Commonly referred as the "reward" neurotransmitter, using the word "reward" isn't about whether something is good or bad but refers to the "Reward System" in the brain. Originally, all of the research was done using experiments that "rewarded" the test subject. Thus, the name "Reward System." Over time, scientists have learned that this system does much more but the name never got changed. Dopamine's role in the Reward System is to signal the brain to repeat an action which is why dopamine is tied to addiction and motivation. Dopamine is released any time you anticipate something... good or bad.

When you are anticipating a reward or outcome, dopamine is produced in a couple structures of the midbrain (VTA & substantia nigra) & basal forebrain (nucleus accumbens). Depending on the location, the dopamine then moves to help control motor function or to the prefrontal cortex (PFC). The PFC is the area of the brain responsible for executive cognitive functions such as focus, paying attention, self control and self awareness, memory, and learning. Dopamine is a powerhouse of a neurotransmitter.

How does dopamine affect our behavior?

Neurotransmitters don't work alone, they work in conjunction with other neurotransmitters. In order to create a habit, you need dopamine (to pay attention so you can repeat the behavior), acetylcholine (high emotions = important), and norepinephrine (energy to take action). Together, these neurotransmitters are responsible for creating new neural pathways.

Unwanted behaviors don't just include bad habits like forgetting to brush your teeth, remembering to unpack your lunch box, and getting distracted from what you are working on, unwanted behaviors also include our thoughts.

Dopamine is the neurotransmitter responsible for thought. Every thought you've ever had began because your brain produced dopamine to start the thinking process. Remember how dopamine is the repeat signal? Well, when you have negative thoughts such as being critical of yourself, complaining, doubting yourself, and not feeling good enough, these kinds of thoughts have high emotional importance which means your brain is going to produce acetylcholine. And since negative thoughts create stress, your body will produce norepinephrine (take action) to give you energy to get out of the stress. Together, you're creating or reinforcing neural pathways to repeat those same thoughts.

Why is it important to have high dopamine levels?

Besides needing dopamine to change unwanted behaviors and create new habits, with low levels of dopamine the body has to work harder to function in daily life. In particular, when there are low levels of dopamine the body experiences more stress. When the body is stressed, the body produces cortisol. When there are high levels of cortisol then it is harder for the body to perform the maintenance functions such as sleeping, digesting, and producing the sex hormones (estrogen, progesterone, and testosterone). This creates a cycle of low dopamine production > increase cortisol production > lower dopamine > increase cortisol, and so on.

How to break the low dopamine/stress cycle?

There are two ways to stop the low dopamine/stress cycle: Stop cortisol production or increase dopamine.

During sleep, cortisol production is inhibited. With proper amounts of sleep then the brain can begin increasing dopamine production but only after the body has "cleaned up" after itself. But we can't all take a nap whenever we want and most of us have bad sleep habits.

Does that mean you are doomed? No, you can increase dopamine production.

How to increase dopamine levels?

How does pain trigger dopamine production?

Pain does not always come in the physical form. Pain often comes in the form of anxiety and depression. Anxiety and depression cause stress. If you're familiar with the stress response (fight, flight, freeze, flop, and friend) then it'll be easier to understand why dopamine is produced.

Anytime something in our environment is uncertain (stress), our brain is ready to take action (norepinephrine). If the situation causes an emotional response (acetylcholine) then the brain pays attention to catalog or capture the situation. If we take action that increases our emotional response (escaping from danger, reducing stress, playing a game, feeling appreciated, feeling wanted, sense of belonging, worthiness, etc) then our brain creates dopamine so we can repeat the behavior in the future to reduce the uncertainty of events.

This is why dopamine is at the heart of addiction. Addictive behaviors reduce stress in the moment even if they cause more stress over the long term. Most of us are familiar with the typical examples of:

Truly, any behavior that has some level of stress (anxiety and/or depression) attached to it can become an addiction. Checking your phone, anticipating likes on social media posts, reading to escape, exercising, listening to podcasts, and watching YouTube videos are examples of very common behaviors that become addictions to lots of people.

Unfortunately, as we learned before, stress causes cortisol production which then actually ends up decreasing dopamine production over the long term. But luckily, pleasure is another pathway to dopamine production. I don't know about you, but I'd rather use pleasure than pain to increase my dopamine levels.

How does pleasure trigger dopamine production?

The way the brain produces dopamine from pleasure is actually the same mechanism as for pain: whenever we are doing something, if the situation causes an emotional response (acetylcholine) then the brain pays attention to catalog or capture the situation. If we take action (norepinephrine) in pleasurable activities that increase our emotional response (laughing, feeling happy, joy, satisfaction, worthiness, belonging, etc.) then our brain creates dopamine so we can repeat the behavior in the future to reduce the uncertainty of events.

Did you know that there is a way to biohack your ADHD? It's true! Dopamine is the key to biohacking your ADHD and you can use orgasms to increase your dopamine production. Orgasms are the easiest and quickest way to boost dopamine. Creating a self pleasure practice that is based on neurobiology will help you increase dopamine over time.

Did you know that dopamine is responsible for numerous functions including memory, attention, & learning. Low dopamine levels can lead to a number of problems including depression, anxiety, addiction, and ADHD. But did you know there are 5 overlooked symptoms of low dopamine that doctors rarely talk about until there is a problem?

Moving Trauma Out of Your Body: 4-Step Process for Healing

Trauma is a very real experience that can leave people feeling frozen, helpless, and alone. The memories and the emotions can stay stuck in your body for years, causing pain and disrupting your life. In order to truly heal, you need to move the energy that got stuck in your body when you experienced the trauma and change the way your memories impact your life. This 4-step process will help you do just that!

Are you addicted to your anxiety? The truth about Dopamine

Most people are addicted to their anxiety but they don't even know it. Dopamine is the culprit behind this addiction, and it's triggered and produced whenever you are anxious (or depressed). If you lead a stressful life, then you're constantly triggering your production of dopamine. Unfortunately, the way the system works is that your brain will then redirect your biological resources in order to create cortisol. This can be extremely harmful to your health.

Why Reducing Anxiety Starts with Self-Partnership

For many of us, anxiety is something that we live with on a daily basis. It can be debilitating and make it difficult to function in our everyday lives. When we are constantly stressed our nervous system gets out of whack. Fortunately, there are things we can do to help regulate our nervous system and reduce our anxiety. 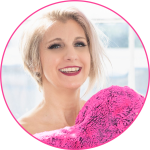 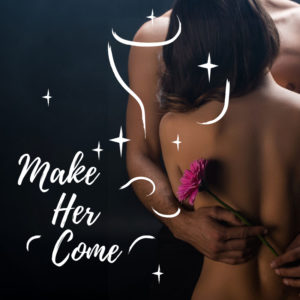 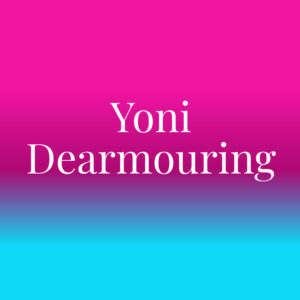